I have numerous parents asking for a balance bike with a steering limiter or whether they are needed or not.

First of all, just a quick explanation of steering limiters if you aren’t familiar.  Steering limiters on balance bikes are generally a part of the headset that restricts a the handlebar turning movement.  Generally the limiter will restrict the turning to 20-30 degrees in each direction.  The thought here is to prevent a child from over turning the handlebars and causing a jack knife situation. If you can visualize the child steering to the far left and leaning to far over the handlebars may cause the the wheel to roll backwards in the opposite direction and then the bike and child will fall.

I understand the concern – the last thing you want is your child to fall off the balance bike and then refuse to use it again.

The Pros of having limiters is that it will prevent the bike from jack knifing. The cons of having the limiters is that it limits the amount a child can turn the handlebars on a bike.  By limiting the amount of turning during the balance bike stage, you are not getting them as ready as they should be for a pedal bike with full turning capabilities. Many balance bike manufacturers that used to have limiters have since removed them due to the fact that they feel that in the event of a fall off a balance bike the limiter will prevent the handlebars from laying flat against the ground and instead, one handle bar will be pointing up in the air.  Accidents do happen, but to be honest the chance of jack knifing without a limiter and then falling with a limiter and hitting the handlebars are pretty equal and not as common as you may think.

Most quality bikes have improved geometry of the fork that makes them safer. This is measured in the amount of fork rake (see image 1-1). Bikes with more rake tend to be more stable in regards to jackknifing. 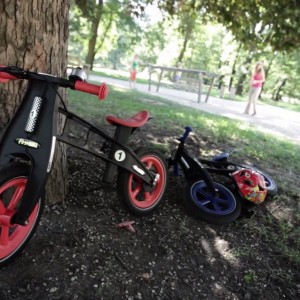 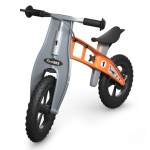 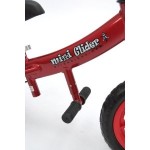